Michael – came to me for relationship help about his girlfriend feeling fearful around him. The energy led me to his young teen years living with a physically and verbally abusive father. He had taken on all of his mother’s fear to protect her from the consent abuse along with protecting his younger brother. Mom came in from spirit to help release the extreme fear, pain, and abuse energies. A total clearing left Michael very raw, open, and vulnerable from the healing session. Several sessions later, his girlfriend did not feel the threat and armoring with Michael anymore, and their relationship was able to flourish. Michael no longer needed to defend himself nor be on-guard with others. His own light was able to shine through for a more peaceful life.

Smitty – came to me with a teenage daughter who could not stop cutting herself. The daughter was having trouble being here on this dense planet. She was very ungrounded and disconnected to life. After several sessions over a period of a year, we were able to heal deep emotional wounding from her estranged father, sexual abuse, and self-hatred tendencies. Eventually the cutting did stop completely and she is currently living a stable life with her self-worth intact and having healthy boyfriend relationships. 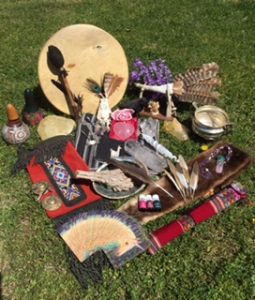 Naomi – came to me with a rare blood disease while under medical care. After each energetic healing session, she would get higher blood counts with her doctor, who said to keep doing what you are doing as it is working. She was able to “hold the charge” longer after each session and eventually healed using both medical and spiritual modalities.

Beth – came to me for emotional & physical chronic fatigue symptoms due to caretaking duties for her father, who was very controlling with verbal abuse. Several sessions addressed her inner child wounding by her father, shame and guilt issues, and self-hatred and a tendency to never let herself “off the hook” of responsibility. Her understanding her chakra orientation, life lessons, and addressing her mental habits allowed for a complete shift in her presence. She was able to hold her power while in her father’s presence despite his continued abusive attitude. He did make his transition during our sessions, and she is currently living a most precious happy life with her son allowing herself to be a creative artist once again with a solid self-worth foundation.

Stephanie – came to me from her daughter’s recommendation for a general session. She did not mention any medical history until I had her in session and tasted radiation in my mouth while I had my hands over her breast area. She then told me of her recent breast cancer and chemo treatments and was surprised how I sensed this. During several sessions, we cleared the radiation and did some deep emotional healing that went down the Ancestral lineage of her family. She is clear of all post-surgical effects and is living a very fruitful life with great energy and spirit.

Disclaimer: No part of this site is intended to diagnose, treat, or cure any illness. Nothing on this site is to be construed as medical advice; Linda Lightfoot is not a doctor. Please discuss your personal health, including any options or ideas you may read on the internet (on this site or others) with your personal, qualified health practitioner before making changes to your diet or adjusting/discontinuing any medication. We are not responsible for any adverse outcomes associated with using or misconstruing advice or information on this site.

We're not around right now. But you can send us an email and we'll get back to you, asap.